Walks discovering new places in Brent and London with a friendly group of about 8-10 members. Walks usually 4-7 miles with lots of refreshment stops.

Please let me know if you’d like to join us.

2021 - Virtual tour of the Thames foreshore

Our virtual tour of the Thames foreshore was with Will Rathouse, Museum of London Archaeologist.

Brent U3A walking group has been on a couple of excellent guided walks along the Thames foreshore with archaeologists from the Museum of London, exploring the foreshore at Putney and by the Globe Theatre. The walks were so good that, when Will approached us about doing a walk with him on the computer, we jumped at the opportunity.

Will is one of three archaeologists working on the Thames Discovery Project. This project has been running for 13 years now and aims to monitor the intertidal foreshore of the Thames the bit that you can only explore at low tide - as well as introducing it to as wide a range of people as possible.

19 of our group signed up and Will took us for a great tour of the intertidal foreshore between Blackfriars and London Bridge, focusing on the one heavily industrialised South Bank. Using his excellent pictures, we explored 17th century sewage pipes made from hollowed-out logs, no human remains here, fortunately - trunks of a 5,000-year-old forest, still clearly visible at low tide by Blackfriars Bridge, and several stone causeways that once led people and life-stock down to ferries.

Will also pointed out chains under London Bridge and all along the river front. These were installed after the Marchioness Disaster in 1989, when 51 people drowned after the Marchioness sank. Many people on board managed to swim to the riverbanks but, tragically, could not pull themselves out because the tide was too low. The idea of such chains along tidal rivers has now been copied across the world.

It was an inspiring talk and we were able to ask questions at the end. We’re very much looking forward to going back to the Thames in person, for a tour with Will and to continue our walk westwards along the river: we walked from Hampton Court to Erith in 2016 and we started walking back in 2020 when Covid-19 struck.

To find out more about the Thames foreshore and the Thames Discovery Project, please visit http://www.thamesdiscovery.org/ 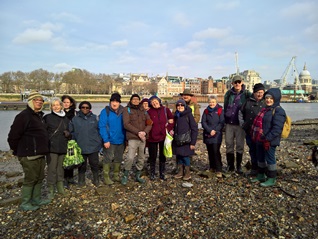 We had a surprise day of glorious warm sunshine for our February walk along the Thames foreshore at Blackfriars, led by Museum of London archaeologist Will. He led us down to the low-water mark and guided us over sand from London Country Council 1930s beaches, chalk and gravel from Victorian moorings for barges and lighters and black-stained pebbles from coal deliveries to Gilbert Scott’s Bankside power station, now Tate Modern. We found glazed pottery that may have been Tudor, bits of Victorian clay pipes, 18th century drainage pipes, with water still flowing through hollowed tree trunks, oyster shells galore, possibly Roman, and learned that the chains hanging all along the river front are designed to help swimmers drag themselves out of Thames waters, installed following the tragic deaths of so many people after the Marchioness Disaster. Some of us even had a paddle and enjoyed the excitement of sudden waves from passing boats. We started with refreshments at the riverside Founders Arms and finished with lunch at Southwark Cathedral’s Refectory. After all, the walking meant we’d earned our lunch – 10,000 steps from start to finish at London Bridge Station. Photo above: At Gabriel's Wharf (© SM). 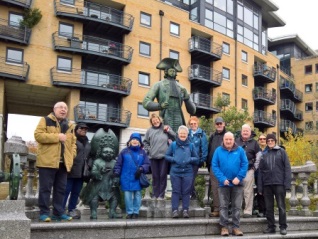 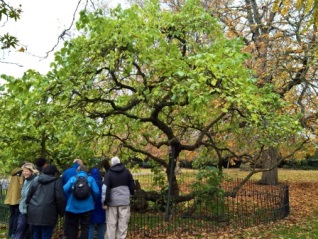 In November we went back to walking the Thames, retracing our steps from east to west. We started in Greenwich, by the Cutty Sark, and walked through Deptford and Rotherhithe to Bermondsey and London Bridge. We got our photo taken by the statue of Peter the Great and admired a 400-year old mulberry tree in the former garden of John Evelyn’s estate in Deptford, photos above (© SM). In Rotherhithe we enjoyed a cuppa at the Blacksmith’s Arms, passed the Brunel Museum and Surrey City Farm. In Bermondsey we looked at the remains of Edward III’s manor house and the statue of Dr Salter’s Day Dream. Finally, in London Bridge, we finished our walk with a well-earned lunch at the excellent Southwark Cathedral Refectory. 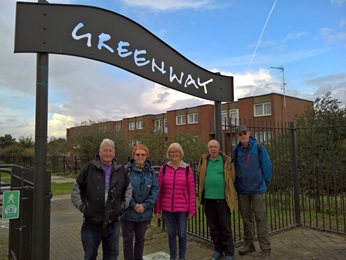 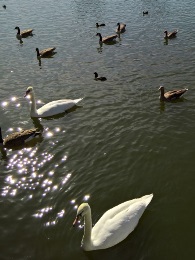 September and October sunshine found us walking these matching outfalls.
The Ridgeway from Plumstead to Erith in South East London was a path along the top of the pipe to Erith Processing Plant by the Thames - about 3 miles of easy even walking, with good views over hills and river. We then cut past the Mute Swans on Southmere, through Thamesmead Estate, along an elevated walkway, high above busy streets. At Lesnes Abbey there were the remains of a medieval monastery in a delightful park. The monastery was founded as penance by one of the murderers of St Thomas Becket. We explored hilly sweet chestnut woodland, a fossil park, a monastery-style garden and an excellent café.
Our next walk continued the theme of rivers overground and underground. We followed the Greenway in north London. We picked it up near Hackney Wick, following it high above the Olympic Park, checking out an excellent café and then passing over east London, past Abbey Pumping Station in Stratford, the palace of pumping stations. We took a diversion in Plaistow for a pretty park and good café. At the Beckton Alps we sheltered from hail and rain and enjoyed a view of this small hill.
Photos, above, on the Greenway and at Southmere in Thamesmead (© SM). 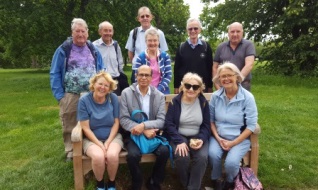 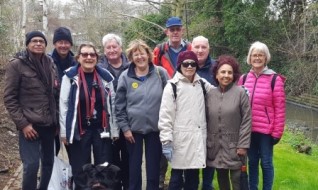 In May we walked along the River Ravensbourne from Ladywell through Lewisham and Deptford to Deptford Creek. We took in Lewisham Park and views over London from Hilly Fields in Ladywell. Then headed north through Brookmill Park – lake, fountain, flowers and remains of the lost railway to Greenwich. In Deptford it was urban regeneration and arty types until we reached the Thames at the statue of Peter the Great.
Our March walk was along the River Ravensbourne and the Pool River – Lewisham’s linear park. What did we enjoy most – the trees, the rivers or the sandwich in Ladywell? We followed the prettiest parts of the rivers: six miles of parks, fields and woods, from Ladywell Station in Lewisham heading south and upstream to Beckenham Hill Station in Bromley – good way-marked walking on even paths.
In June we traced the Chaffinch Brook, the Pool River and the River Ravensbourne. Walking from Elmers End to Lower Sydenham through Kent House.Then on to Beckenham Place Park.
Photos by Rem and Margaret, left: at Hilly Fields and right: by the Pool River (© Rem). 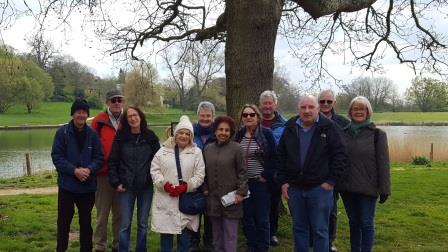 In April Julie led our exploration of the village of Hampstead as well as the Heath. From the parish church of St John at Hampstead (memorials of John Constable and John Harrison) we visited Oriel Place to see a giant London Plane tree; passed the Flask public house and the Chalybeate Well; an avenue of trees, planted to replace ones lost in the storm of 1987; a source of the River Fleet; a viewpoint for the City; and the garden at Keats House Museum. Photo left: by the Heath ponds (© Rem). 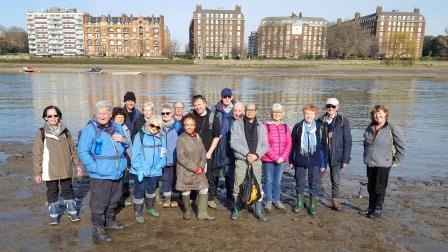 Our February walk was guided by archaeologists from the Museum of London. A much bigger group than usual, with 24 Brent u3a members and guests. We explored the lower reaches of the Thames shore at one of the lowest tides of the year. The sun shone as we inspected the mud and peat beds to discover Roman pottery, animal bones, flint tools, Anglo-Saxon fish-traps, a clay pipe bowl and much, much more. After a terrific lunch at Putney Church we only wished we’d remembered our sun tan lotion!
Photo by Rem and Will, above: on the foreshore by Putney Church with our guide Eliot (© Rem).

We’ve been walking east-bound along the River Thames since December 2016. We started at Hampton Court and made it as far as the end of the official path at Woolwich in August. Since then we’ve been walking tributaries of the Thames, including Dollis Brook, the Wandle and the River Brent. We also extended our walk from Woolwich to Erith. In 2018 we plan to walk the Thames in London west-bound and take in more tributaries, including the River Lee and Pymmes Brook. All our walks are about 4-7 miles long and start and end at tube of train stations, with lots of cafes and stopping off points on the way to make for comfortable urban walking through beautiful London countryside.

Our December walk was from Manor House along the New River Path to Islington.
Photo, above: by the mirror ball waterfall sculpture, Berkeley Homes Woodberry Down (© SM). 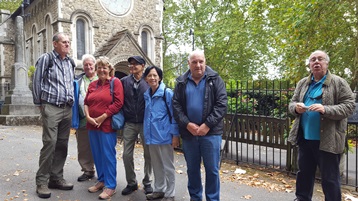 September sunshine for our walk from Blackfriars (Watergate) under Holborn Viaduct; between St Pancras and Kings Cross stations; along Fleet Road in Hampstead and by the Hampstead Ponds to Kenwood House.
Photo, above: at St Pancras Church on the River Fleet (© Rem). 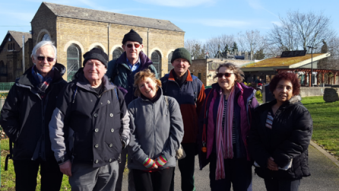 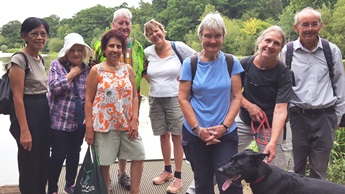 In July we walked from from Cockfosters to Arnos Grove along Pymme's Brook.
Followed by Pymme's Park to Pickett's Lock and the River Lee in August.
Photo, above: start of the Pymme's Brook, at Jack's Lake, Monken Hadley Common (© Rem). 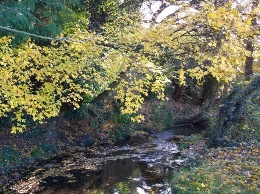 In November 2017 we made our start walking south from Totteridge. A scenic and rural section with a nice cafe stop. Photo above, Autumn leaves over the Dollis Brook (© SM). 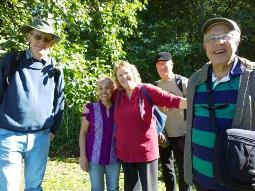 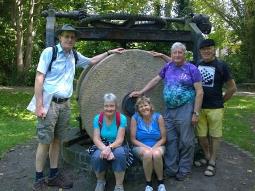 In August and September 2017 we walked along the River Wandle Trail, a tributary of the River Thames.

Photos above, at Wandsworth and Merton (© SM).

In December 2016 we made our start on the London section of the Thames path. This was one of most scenic and rural sections – Hampton Court to Kingston and Teddington – about 5 miles of level riverside walking on good level paths. Photos above, at Syon House and by the O2 (© SM). 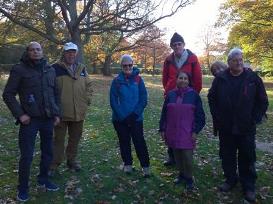 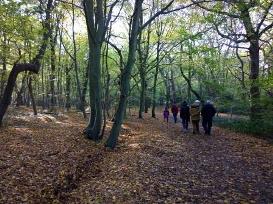 Completed in 2016 we’ve walked the Capital Ring photos above, at Richmond, (© SM), London’s long-distance circular path of 84 miles that takes in canals, gardens, parks and river. We’ve been walking it since June 2015 in chunks of 4-6 miles and we usually get 6-10 walkers, with lots of stops for rest and recreation. Highlights? Lots of wonderful places we never even knew existed, including University of East London, Seven Droogs Castle and the dinosaurs of Crystal Palace. Next project, the Thames Path. Watch this space!