To enrol in any Brent U3A learning/interest group, you should become a member of Brent U3A. See the 'membership' link.

Annual General Meeting of the U3A in Brent: 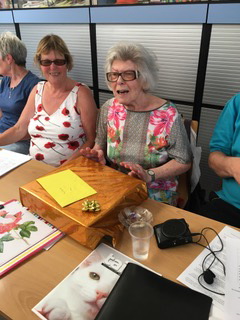 Presentations at the 2018 AGM

At this year's AGM Sylvia and Donald have stood down from the Committee.

They were both thanked for their long service as Chair and Secretary of the U3A in Brent.

of Sylvia with Cathy;

and Donald with Celia

Would you like to stand for the Brent U3A committee?

My second term as Chairman is coming to an end and I have decided to offer myself for a further year as I believe there is something I should try to tackle before handing over.
We are all getting on, and the Committee which has done such sterling work consists largely of those who have given their services for some time. We urgently need new blood, visions and ideas. Some existing members are standing down and so we need fresh faces. If you feel you can attend four meetings per year and help in the running of this organisation which offers so much to its local members, please stand to join the Committee.
Just email to ask for a nomination form or if you want a few more details!
Voulie